Sudoku by Thomas Snyder – The Art of Puzzles


Made with Flare More Info“>

[This is a repost from our archives with new notes at the top about the creation of this puzzle originally on the site ten years ago: Several people have commented to me through the years on the look or feel of a “Snyder Sudoku” — the main example when I think of my own style is something I might share as a new/bonus puzzle on Sunday, from a competition setting and the theme is 100% hard logic right at the start. But other meanings for Snyder Sudoku are about the look of the puzzle standing out too, with esoteric but visually interesting themes far beyond just symmetry — like segregating digits or repeating exact shapes multiple times (like on the cover of The Art of Sudoku four times). When I was constructing the three sudoku for this week initially in 2013, I wanted to make callbacks to different memorable sudoku styles I’d used before in my livejournal days and in this case copied an earlier “missing digit?” idea of mine, with a new composition in the series.] 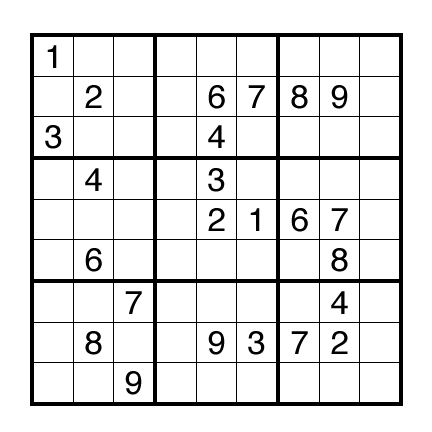 or solve online (using our beta test of Penpa-Edit tools)

Theme: Missing Digit? (opus 2); this avant-garde sudoku poses the question “Is there a 5 in the grid or not?” It is similar to an earlier work by Dr. Sudoku first displayed at the Silicon Valley Puzzle Festival where a different digit, 8, was missing in the same way.